Croatian Marin Čilić came to the US Open in Flushing, NY (Queens) on Monday night lacking a Grand Slam victory and left a CHAMPION! He won his first ever grand slam (and US Open) in decisive fashion (6-3, 6-3, 6-3) in straight sets dominating fired up-and-coming Japanese Kei Nishikori! The match was so quick and tidy, it finished in under two hours! 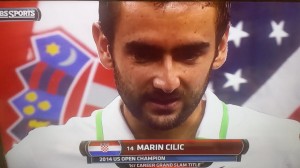 In 2013, Čilić was banned for coming up with a dirty drug test for HGH-related drugs. Now he is turning things around and his rank (#14) will definitely boom up into the top ten (in the world) following this win! 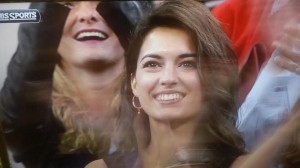 Goran Ivanisovic, Čilić coach, is the last Croatian to win a Grand Slam at Wimbledon in 2001. Check out Čilić girlfriend Kristina Milkovic (pic above) who was stealing the spotlight on the sidelines… #Sizzling 😉