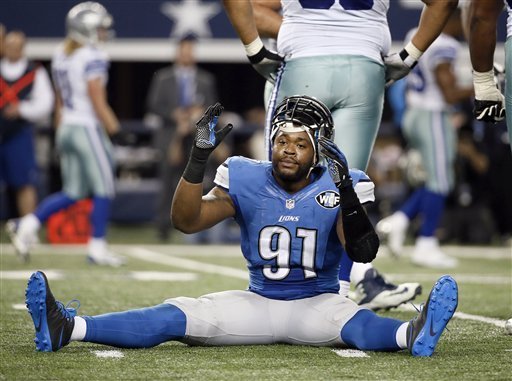 Detroit Lions’ defensive end Jason Jones puts his hands up in aggravation after the Lions sacrifice a 13-point lead to the Dallas Cowboys on Sunday January 4, 2015.

In case you missed it, this recent weekend was action packed with NFL madness, as the (Wild-Card) Playoffs filled up the TV time sheet! Tony Romo and the Cowboys thwarted the Lions (on a controversial non-call penalty), Andrew Luck and the Colts ate up the Bengals, Joe Flacco and the Ravens stuffed the Steelers, and Cam Newton and the Panthers ran over the Cardinals! The Panthers amazingly are still standing with a (7-8-1) regular season record! I’m not gonna mess with the statistics and scores, but all the games were neck-and-neck going into halftime! Check out Detroit Lions defensive monster Ndamukong Suh emotional post-game video below and more after the jump…