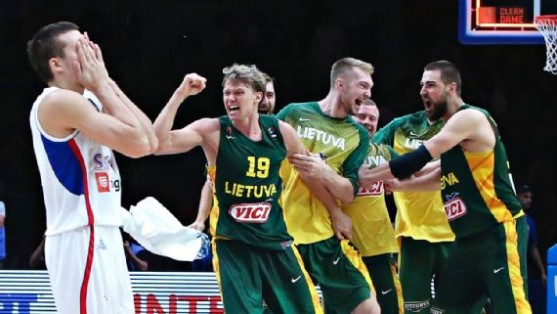 Lithuania served Serbia a crushing defeat, 67-64, on Friday to advance to the EuroBasket (FIBA Europe) Finals to take on Spain! Lithuania (and Spain) have automatically clinched a spot at the 2016 Olympic games in Rio (Jogos Olímpicos de Verão de 2016) by advancing to the Finals! Serbia must now claw and nail through the Olympic qualifiers next July flirting with Greece, Italy, France, and the Czech Republic! Serbia, the favorite in the tournament, did come back from a 28-17 deficit early in the second quarter to keep the game close, and won all seven games leading up to the semi-finals decisively, but it wasn’t enough! The game was ugly with free throws made outmatching three points converted by a startling rate of 4:1. It just goes to show that in basketball (as in any sport really), every team is a true contender.