#GoAmazin Honestly, I am a Yankees fan, but I still got love for the Mets! The NY Mets finished off the LA Dodgers 3-2 tonight in game 5 of the division series to advance to NLCS! Daniel Murphy (pic above) deeking deserted third base on a defensive shift was perhaps the play of the game, as he scored on a sac-fly on a next play to tie the game at 2! Dodgers’ Justin Turner was hitting switches with the bat, but left the bag (third base) for a costly mistake! Murphy followed up in the sixth inning smoking a solo shot to put the Mets ahead for good 3-2! 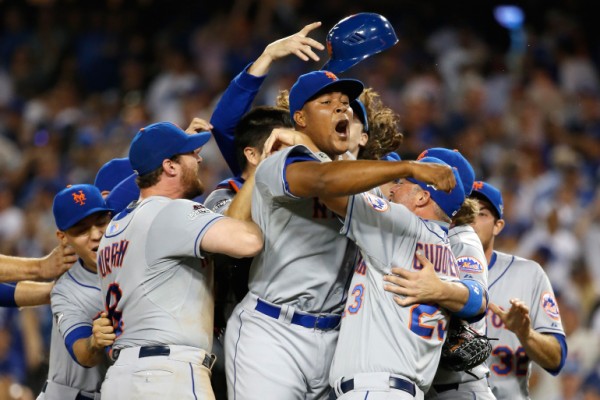 The Mets played smart sticking with the starter Jacob deGrom (pic top page) through six even though he had batters on the bases in each inning, putting a usual starter Noah Syndergaard in the seventh inning, and having the closer, Jeurys Familia, close out the eighth and ninth inning!

It seems like all the teams in the AL Championship series and the NL Championship series will be honing predominantly blue and white with the Kansas City Royals, Toronto Blue Jays, Chicago Cubs, and the NY Mets! Which brings up the discussion about the bat flip by Toronto Blue Jays’ Jose Bautista the other night. He was just ridiculous something for the Olympics, and last time I checked Bautista is not Canadian? If it was a redemption for the last play in the top of the seventh inning where the Blue Jays catcher threw a ball to the pitcher and hit the bat of the hitter at the plate allowing a runner to score, and give the Texas Rangers a 3-2 edge that was just smart baseball. The blue chip Blue Jays act like they are trying to free a nation, but meanwhile if it was the NBA, Roy Vincent wouldn’t have even allowed the Jays to pick up three stars in one deal for almost nothing.