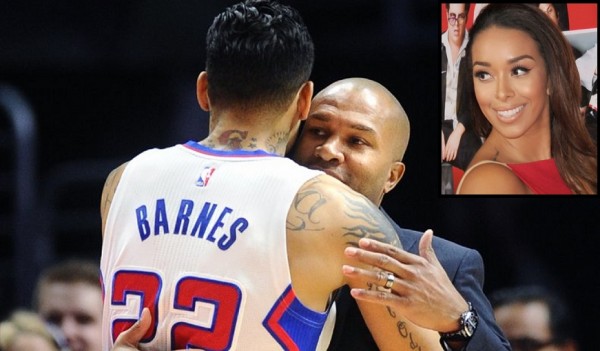 Saturday night after Memphis Grizzlies’ Matt Barnes FaceTime’d his 6-year old twin sons, Carter and Isaiah, he found out that former Laker teammate (2010-2012) and “friend” Derek Fisher was at his ex-wife’s house (he probably still owns)?! The kids were confused because the break up is still fresh, they broke up early in 2015, and they thought Fisher was Barnes’ friend, not playing house. That is a lot to take in for young kids. And Barnes only drove 15 minutes away despite earlier reports indicating he drove 95 miles to confront his former friend (from Santa Barbara to Los Angeles). The family drove to Santa Barbara earlier in the day after the Grizzlies workout. The cops cleared Barnes of any charges, so it appears that he was just trying to protect his kids in an awkward situation. Point blank ex-wives are off limits especially between boys or “friends.” All excuses aside, its just plain filthy and disrespectful.

I always thought Fisher was a little suspect hiding behind his appeal for searching for an organ donor for his son. I seen Fisher take NBA players out of games intentionally and to me that is bad sportsmanship and lack of character. In fact, I wondered how the hell he was the president of the NBA Players Association? Fisher is currently the NY Knicks’ head coach. Check out details on the incident below…

“Now, Carter is like the rambunctious one. He’s always jumping off the walls. And when I saw his face, he was just sitting there, and I knew something was wrong. I was like, ‘What’s wrong, Carter?’ and he shook his head, ‘No.’ Then he lays his head down on the couch, puts a pillow in front of his face and says, ‘Mommy’s friend Derek is here.’

“This wasn’t a phone call. We were on FaceTime. I could see him and the look on his face.”

“I can’t believe people think I was some maniac driving 95 miles and listening to Tupac to go beat somebody up,” Barnes said. “No. I live 15 minutes away, and I was going over to check on my kids because they seemed uncomfortable. That was my main reason for going over there.”

“We were close. We were friends,” Barnes said. “Some things have happened to change that. It is what it is.”

“In terms of distraction and how players feel about distraction, et cetera, we’ll see how it goes for our team,” Fisher said. “It’s unfortunate. But it is what it is at this point.” – espn