#WorldCup2014 went off with a BANG today in certainly a most peculiar away… a little something to sink your teeth into.. LITERALLY! Uruguay forward Luis Suarez bit Italian defender Giorgio Chiellini on the shoulder during a controversial 1-0 win today?! The guys nickname is “Cannibal,” as he has bitten players twice before; the first resulting in a seven-game suspension and the second a 10-game suspension. He also got fined and suspended for his big mouth in a racial slurs incident before as well.

The obvious question is should he have been given a red card in the match, which in effect could have negated their goal (which they scored a minute later with Italy short one-man on a red card call)? and…

Will he be dealt a suspension for his biting incident after the World Cup looks at the tape? The real dispute for the World Cup Federation is tradition vs. ticket sales and publicity (be it may negative publicity). He should be suspended for the duration of the World Cup! Everything is big money these days, it seems the strange and unusual act out and grab the headlines in the mainstream media over the more interesting and important stories… ???. PLEASE LEAVE A RESPONSE BELOW! Hvala 🙂 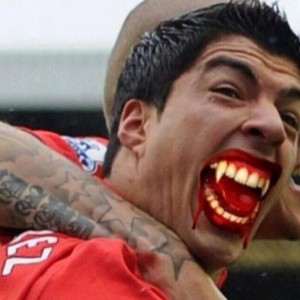