Early on in the NBA Finals, there was a lot of hype surrounding (rugby style playing) Matthew Dellavedova, even tagging him Delly, but he fizzled down the stretch, as he just plain lacked talent! The difference maker for the Warriors was Andre Iguodala AKA Iggy lol, who played good defense, and scored at will in this series! He finished with 25 points tonight! Another golden nugget was Draymond Green, who had a triple-double for Game 6 tonight with 16 points, 11 rebounds, and 10 assists! Green finished second in voting for first-team all defense this season!

What the Warriors lacked in height, they made up for with their relentless offensive scoring, especially Stephen Curry, who shot almost 50% (from three) for the NBA Finals, and will be the NBA Finals MVP! He finished with 25 points, six rebounds, eight assists, and three steals tonight! The Warriors posted an amazing 67-15 for the regular season! It is finally over, and the deserving team has prevailed! 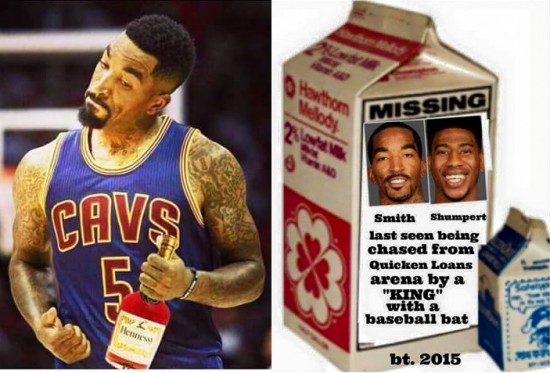 I mean Lebron basically bought this team, deciding all aspects of trading, including unloading the NY Knicks garbage, Iman Shumpert and J.R. Smith! Lebron finished with 32 points (13-33), 18 rebounds, nine assists, and two steals! If the Cavs didn’t lose superstar Kyrie Irving, it may have been a completely different story? What’s next, I hope Curry doesn’t extend himself too much and try to drop a rap album; not a good look lol!

BIG S/O to the facebook NBA SMACKBOARD CREW FOR THE FUNNY AS HELL PICS!!! Got mad love for ya 😉