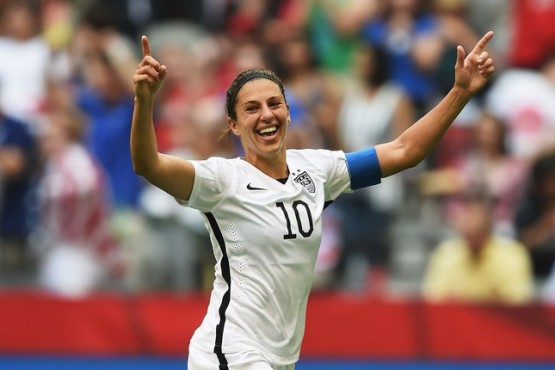 U.S. Women’s Soccer is back on ‘Top of The World’ after capturing the WORLD CUP GOLD, which had been eluding them since 1999! Carli Lloyd helped U.S.A. jump out to a quick 4-0 start in the first 16 minutes of play, scoring three goals including a hat-trick goal! They then held onto a 5-2 win over the defending champions, Japan! Carli Lloyd (pic above) was of course named the player of the tournament and awarded the coveted Golden Ball (video below)! The World Cup took place in Vancouver, British Columbia; the western section of Canada.

Soccer has quickly become the mainstream in the U.S. with children starting to compete at five-six years old. Obviously, not too many women are going to go out and crack helmets on the football field; is kind of a stupid sport to display brawn or toughness. I am proud to see that the U.S. women’s soccer team have developed into world dominating competition!