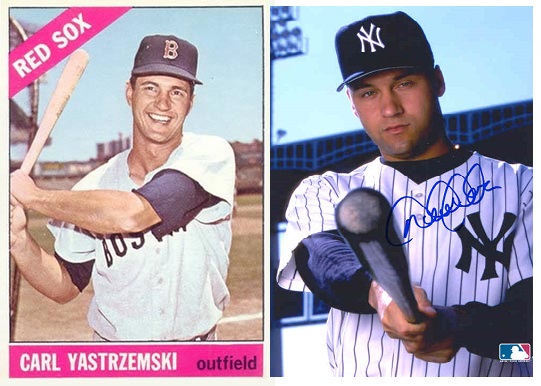 During the NY Yankee’s disappointing 4-2 loss to the Texas Rangers tonight, Yankees’ “da captain” SS Derek Jeter entered the record books yet again! In the top of the third inning, Jeter smashed a hard double (off Yu Darvish no less), which ground ruled (bounced) over the fence! It was his second hit of the game, and effectively entered him into a tie for seventh place on the All-Time Hits List with Bo-Sox legendary Carl Yastrzemski AKA Yaz! To even better that, Jeter went on to strike his third hit of the game, a (could have-been clutch) two-out single in the top of the seventh inning, which put Brett Gardner on third (from first base)! Jeter now has 3,420 career hits, surpassing Yastrzemski (3,419) and putting him only ten hits away from underrated Honus Wagner (3,430) in sixth place! Check out the chart below!!!

What U Think??? Jeter is retiring after this season to spend time with his family; which is understandable. Now Jeter is still in his prime at 40, do you think he should give the fans and people who would die to be in his shoes one more year before retiring? I think he should play one more year, even though it is his family, he was/is a hell of a Yankee, and he will keep the fans, who have supported for his entire career, on their heels wondering what he could accomplish still???